This is the Italeri 1/72 kit, but it is very basic and essentially a wargaming fast-build kit.  A fair bit of work was required to bring it up to acceptable standards.  This is not a blow-by-blow account of the build, but a brief account of how I do things with specific reference to the model.  Attention to detail is paramount.  I aim to put in as much detail as would be found in a larger scale model, and for this, good references are essential.  Drawings from the Hunnicutt book, which I scaled down to 1/72 on a photocopier, were very useful, as were images of the interior. Photographs of the M8 Armoured Car, often seen at vehicle shows, from which the M20 was derived, were helpful for external details.

Being very basic, the kit wheels were replaced by resin Calibre 72 items.

Extratech make a brass detail set which was used to produce better in-scale items such as the headlight guards, steering wheel, machine gunners seat etc.  Other external details such as the towing shackles and rear hull lifting rings were replaced by white metal items from my spares collection.  The kit gun mount is very simplified.  The support arms were improved by careful filing and the rear arm completely rebuilt from various thicknesses of plastic strip.  A towrope was made from Karaya cable, the length needed being measured out with a length of fine string.  The towrope eyes bent to shape around an eye-forming template. (A homemade tool constructed from a length of wire pin sticking vertically out of a piece of thick plastic sheeting base).

Good modelling of the interior will make or break an open topped vehicle.

When constructing a model I often break it up into a number of modules, so for example the interior was divided into front driving, and rear crew compartments.  The rear crew compartment was very rudimentary and needed a complete rebuild.  The Extratech set provided very nice crew benches.  Barry Walby at MMS kindly supplied some tiny M1 carbines. The remainder of the interior stowage and equipment was scratch built in various materials.  For example bedrolls and tarpaulins were made from rolls of tissue - good quality stuff as in some shirt packaging, not from a box of household tissues.  This is much smoother and has a finer grain.  Some of these items were secured with miniature straps made from pre-painted fine strips of masking tape, and human hair.  The placing of some of the interior items needed some planning as some of these could not be fitted if other items had been fixed in place.

Painting was done by an Iwata airbrush using Lifecolor paints.  These can dry quickly in the brush so a pinhead sized quantity of Vallejo retarder was added to delay this.  For many years I have used lighter shades than authentic colours to give that in-scale effect.  This is especially so with interiors which sometimes have to be lightened quite considerably, so as not to be too dark and the detail becoming hard to see.  Inside the vehicle, interior items often need a fair bit of shade contrast too, to allow them to stand out for the same reasons.  The olive drab external coat was made of several shades by adding yellow or desert colours to the basic drab, sprayed over an off-black base coat.  These colours were well diluted and sprayed, almost misted on, in several light coats at right angles to the sprayed surface.  This has the effect of producing shading on the details standing proud of the surface, making them stand out. Some of the vehicle codes were hand drawn using a fine tip Rotring drawing pen and white ink.  The stars were produced by reverse masking, after first painting the area off-white before the olive drab coat.  This masking came from some old stationery dry print stars that I purchased many years ago, and an Archer dry transfer item for the star at the front of the vehicle.  When the masking was removed using sellotape from which some of the tack had removed, I experienced one of those rare but fortunate accidents in modelling.  Some of the olive drab had leaked slightly under the masks giving the effect of a weathered star where the paint had chipped off at the edges.  Much of the weathering was sprayed on using various diluted brown and yellow shades to which some Lifecolor Tensocrom medium had been added.  This is marketed as a weathering medium which also seems to shrink the basic colour down over any small detail making it more prominent.  On the wheels, these shades, with the added Tensocrom, were lightly dabbed on by brush allowing better control of application.  Care was taken to ensure the wheels were finished differently so as not to appear identically uniform.  Some items of stowage such as the crew kitbags also received this Tensocrom treatment.  Following a sprayed basecoat in the appropriate but lighter colour, several coats of a very dilute darker shade with added Tensocrom, was brushed on as a wash.  This produces depth and shading and accentuates details. 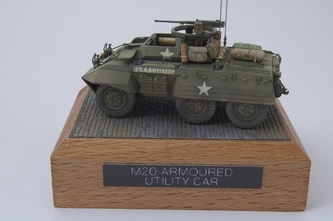 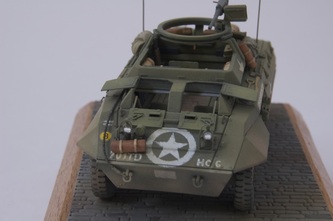 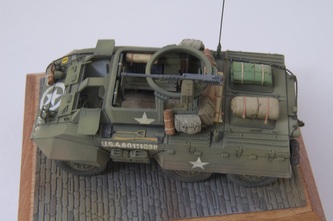